Hammersmith & Fulham in West London offers a great mix of culture and global cuisine. Bordering Chelsea, Chiswick, Shepherd’s Bush and Kensington, and with six tube lines running through it, it makes a great spot for shared ownership residents who want to experience London life. This is a great spot to raise a family - there are exceptional schools, plenty of green spaces, and boutique shopping on the doorstep. It’s also the ideal location for professionals who want an easy commute to work. Recently launched now available in the London Borough of Hammersmith & Fulham in White City are our modern studio, 1 and 2 bedroom Shared Ownership apartments. Set within eight acres of parks and gardens, surrounded by world-class retail, entertainment, education and culture… The Acer Apartments at White City are waiting for you.

Hammersmith & Fulham is a more affordable option than its pricier neighbours Chelsea and Kensington, and is situated a few miles from the hustle and bustle of the West End.

Although this is a prime London postcode, there are also smaller leafier enclaves which are perfect for families or those who want to gain that small community feel within striking distance of London’s amenities. Brook Green, with plenty of open spaces, and Brackenbury Village close to Ravenscourt Park, are two popular options. You can also enjoy the presence of two professional football teams, or discovering the eclectic mix of boutique shops and attractions, and indulging in fine art and even an urban winery, it really is a great spot to call home.

Eel Brook Common offers a green open space for local residents looking for some peace and quiet. Facilities include an Astro turf pitch for community use, tennis courts, cricket pitches and a children’s playground – with the common also hosting an annual circus and other fairs and events. The bandstand here was built in 1894 and there’s also a highly regarded Mediterranean restaurant which is a must-visit.

Foodies will love the Bishop’s Park Farmers and Fine Foods market which is jam-packed with local produce that’s organic to boot. Residents flock here on Sundays to fill their larders for the week ahead. If antiques are more your thing you’ll be spoilt for choice on Lillie Road, which boasts plenty of shops proffering stock from a bygone era. Locals tend to head to Jerdan Place, a short stroll from Fulham Broadway station, to hang out at the independent eateries lining the cobbled street. Fulham also happens to be home to the UK’s biggest and oldest Harley Davidson dealership which opened in 1924, if you feel the need for speed.

With the Thames Path on your doorstep, you can tread the north bank path and take in the local scenery which changes with the seasons. You’ll pass stunning Georgian and Regency houses with a view across to the South Bank and the London Wetland Centre. Head upriver and Chiswick House and Kew Gardens can both be reached in under two hours.

Culture-wise you can enjoy stunning homages to the arts and craft movement at the former home of printer and engraver Emery Walker or at Kelmscott House, a museum operated by the William Morris Society. Pay a visit to the smallest bar room in the UK, at the Dove public house – visited by such luminaries as Ernest Hemingway, Dylan Thomas, former Hammersmith residents William Morris and Graham Greene, or why not enjoy the delights that the Lyric Theatre offers, including community events for kids and families. 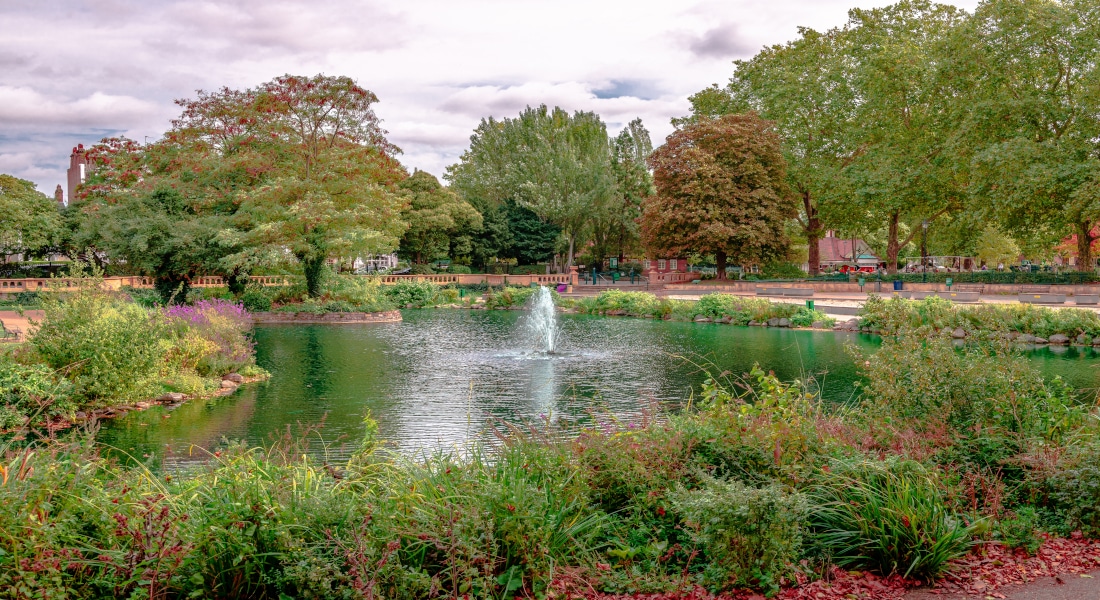 There are plenty of attractions and places to visit in Hammersmith & Fulham. These are just a few of the best local attractions.

Since 1829 the men’s boat race has been a sporting fixture not to be missed and fortunately Hammersmith sits right on the 4.2mile course, Hammersmith Bridge is near to the halfway point. Head to the Lower Mall, which is pedestrianised, and arrive early to get a seat at one of the pub tables that line the path.

It wouldn’t be a Fulham focus without mentioning the beautiful game. Fulham FC has made Craven Cottage Stadium its home since 1896. Stamford Bridge, home to Chelsea FC, can also be found in Fulham, about a mile away from Chelsea itself. The latter offers a stadium tour and museum taking in the dressing room, players’ tunnel and trophy room.

The Hammersmith Apollo, currently called Eventim Apollo, is the stuff legends are made of. This live music venue has hosted Buddy Holly’s final UK dates, saw Kate Bush’s return to live concerts in the UK, and was where David Bowie famously announced he was killing off Ziggy Stardust.

This 20-acre park is a local secret yet is a tranquil spot for a meander and some family time. There’s a park café, a paddling pool, an adventure playground, a nature trail, beautiful landscaping and in the summer it hosts an open-air cinema.

Hammersmith is a melting pot of cultures and residents are truly spoilt for choice when it comes to world cuisine. Thursday’s Hammersmith Food Market features freshly made-on-the-spot delights from crepes and hog roasts to curries and pies. Shepherd’s Bush Market, next to the viaduct for the Hammersmith and City line, is also a top spot for freshly cooked, mouth-watering food.

This historical gem has been home to the Bishop of London since 700, and was used as a base to retreat to in the summer months. The architecture is a mix of Tudor, Georgian, and Victorian and there are 13 acres of walled gardens to explore. Do make time to stop for a cake in the on-site café.

Yes you may be in urban London, but that doesn’t mean you can’t enjoy a little beach-time. Bishops Park is packed with features – including an urban beach. There’s also a water play area, ornamental lake, tennis courts, table tennis and river-side walks. Multiple gardens ensure you never get bored and include a rose garden and a sculpture garden.

There are two renowned galleries in Fulham: Plus One Gallery and the Roca London Gallery. The latter celebrates design, innovation and sustainability in a space designed by Zaha Hadid. The former is dedicated to contemporary hyperrealism with still lifes, urban landscapes and human portraits.

Discreetly nestled down a narrow alley is the UK’s first urban winery. It’s situated in a former gin distillery, has state-of-the-art winemaking facilities and offers tastings and regular events.

In Brook Green, the Ecole Francaise Jacques Prevert attracts students from across the Channel, for its French curriculum. Amongst the area’s state school, several have received top rating from Ofsted, including Sacred Heart High School, Larmernier & Sacred Heart Catholic Primary School, Woodland High School, and St Peter’s Primary School. Those looking for private education are also well served by Hammersmith with Latymer Upper School, The Godolphin and Latymer School, Ravenscourt Park Preparatory, and St Paul’s Girls’ School. Good schools are all part and parcel of Fulham’s offering. Langford Primary School, Fulham Cross Girls’ School and Language College, and Puffins Nursery have all been rated outstanding by Ofsted. There are also plenty of independent schools to choose from, including Kensington Prep School, Parsons Green Prep, The Moat School and Thomas’s Fulham.

Fulham has six underground stations all situated in zone 2: Putney Bridge, Parsons Green, West Brompton, West Kensington, Hammersmith and Fulham Broadway. The overground West London line runs from Imperial Wharf to West Brompton and there’s an outstanding network of buses too. Road links are also strong, with the M4 just 15 minutes away and there are plenty of cycle routes if you prefer to travel on two wheels.

There is a range of hospitals close by to Fulham, including Chelsea and Westminster, Charing Cross Hospital, The Royal Marsden Hospital and Royal Brompton Hospital. Accident and emergency departments can be found at the first two hospitals mentioned above, while The Royal Marsden is the world’s first hospital dedicated to cancer diagnosis, treatment and research. Hammersmith Hospital can be reached from East Acton underground station, White City underground station or Wood Lane underground station. Shepherd’s Bush overground rail station is around half an hour’s walk away. It’s part of Imperial College Healthcare NHS Trust and also boasts a dedicated private facility, The Robert and Lisa Sainsbury Wing.

What happens after you reserve your dream home with us?