With one of the lowest population densities of any English county, families and couples seeking a Shared Ownership home often choose Herefordshire for its peaceful, laid-back lifestyle. But work and entertainment opportunities are never far away: alongside the historic county town of Hereford, residents are only a short drive from Gloucester and Worcester, as well as Birmingham, with its international airport.

Residents of Herefordshire enjoy the best of both worlds: the peace and quiet of rural living, and easy access to the work and recreation opportunities of Birmingham and the wider West Midlands.

While holidays abroad are easy to arrange thanks to nearby airports in Birmingham and Bristol, there are a wealth of recreational pursuits to enjoy in and around Herefordshire itself, from idyllic market towns like Ross on Wye, to walking in the Cotswolds to the southeast and the Brecon Beacons to the west. Indeed, with Wales just over the border, potential outdoor pursuits are vast in number.

But the delights of the big city are never far away. The UK’s second city, Birmingham, is within easy reach, offering world-class shopping in the Bull Ring, superb nightlife, pretty canals and high-profile sports venues such as Edgbaston cricket ground and villa park. 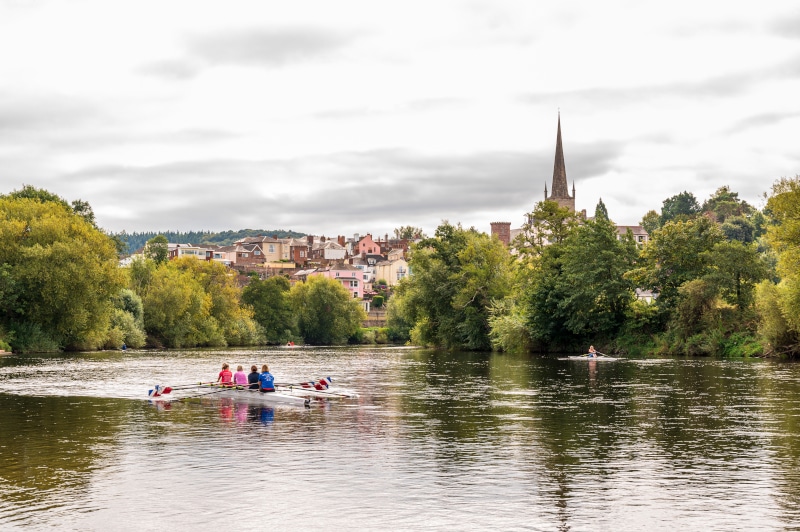 Rowers on the River Wye, Ross on Wye

Points of Interest in Herefordshire

Discover some of the county’s popular landmarks and attractions.

The pretty market town of Ross-on-Wye sits on a kink on the river Wye and is surrounded by the beauty of the Wye Valley.

The town was made famous by Alexander Pope and Samuel Taylor Coleridge, who wrote of philanthropist John Kyrle, the ‘Man of Ross’.

The lively city of Hereford is best known for its magnificent cathedral which was completed in around 1250. The city is enveloped by apple orchards and meadows.

This medieval-looking castle was actually built in the 19th century for the 1st Earl Somers. A private residence, this mock castle’s imposing form can be enjoyed from a distance.

In contrast to Eastnor, Goodrich is the real thing: a time-battered Norman castle that William Wordsworth called “the noblest ruin in Herefordshire”. Originally a wood and mud fortification, its stone keep was built in the 12th century.

Our affordable homes in Herefordshire enjoy a wide range of local amenities.

It’s little wonder a Shared Ownership property in Herefordshire is such an attractive proposition.

While the population of Herefordshire is small, there are still a number of excellent primary and secondary schools in the county, notably Steiner Academy Hereford, St Mary's RC High School and Fairfield High School. Good nearby schools are essential for young families seeking a Shared Ownership home, and Herefordshire is home to a number of highly rated establishments.

Residents of Herefordshire enjoy excellent transport links, including international airports in Birmingham and Bristol, and easy access to the M50 and the M5 - linking up Birmingham, Gloucester, Cheltenham and Bristol. By rail, Birmingham is around 2.5 hours and London is 3.5 hours away.

Herefordshire is served by a comprehensive range of NHS services, GP surgeries, opticians and dentists. There are also private alternatives such as the Nuffield Health Hereford Hospital.