This former industrial hub has been well and truly transformed for the 21st century to make it a comfortable and attractive location to live in. It’s home to an eclectic mix of awe-inspiring landscapes in the Peak District, lively music, shopping and culture scenes in Sheffield and the historical gems of Rotherham.

Nestled in the county of Yorkshire and Humber lies South Yorkshire, marking the entrance to ‘The North’.

It’s a popular spot for relocation as it offers a fantastic mix of buzzy city life if you head to Sheffield or one of the larger towns like Doncaster, but with the rugged hills of The Peak District National Park sitting to the west of South Yorkshire. There’s also plenty of chocolate-box charming villages, like Bawtry and Mexborough which serve up charm and community spirit by the bucketload.

The former industrial centre of Sheffield is highly rated for its great housing options, plenty of amenities on your doorstep and all the benefits of busy, city life. On the outskirts of Sheffield places like Ecclesall are a great choice with good schools and a host of independent shops, cafes and bars – The Sunday Times previously named it the best urban areas to live in.

Doncaster is home to a world-class racecourse, large shopping malls including a designer outlet centre, a Gothic minster and the Yorkshire Wildlife Park. Food markets are popular with residents while further afield villages offer a great balance between community and convenience. Adwick-Le-Street has its own railway station, while Bawtry is a top spot for restaurants, bars and cafes.

Barnsley is famous for its coal mines and has a long history of glass-making. There’s also a 300-stall strong market which has been going for 700 years and plenty of attractions within the town itself. If you’re after on-the-door access to the great outdoors, consider a property near Penistone – the highest market town in the country and situated on the edge of the Peak District.

The pride of Rotherham is its 1,000-year-old minister sited in the centre of the town. The River Don winds through it and there’s the Centenary Riverside Park nature reserve, as well as the massive iron sculpture, Steel Henge. 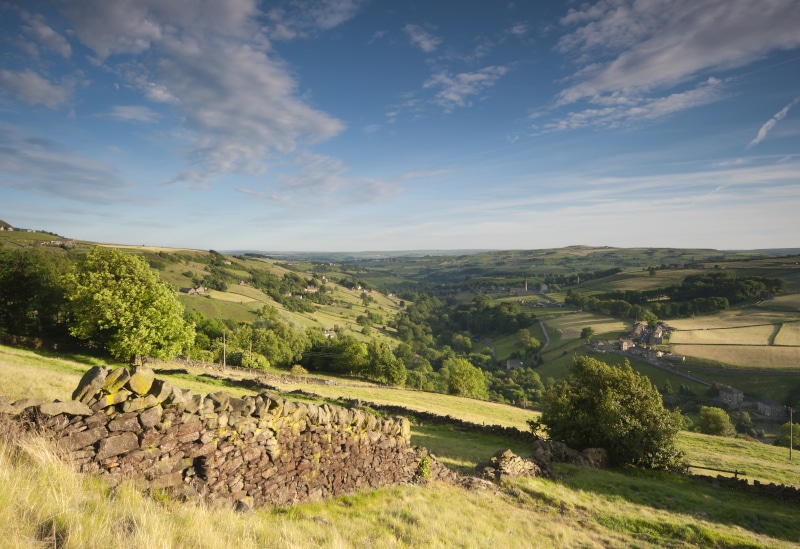 There’s plenty to discover in South Yorkshire. Some of our favourites include:

Soak up the history

Go down a coal mine

While you’ll need to hop over the border into West Yorkshire to visit Wakefield’s National Mining Museum, there are plenty of coal mines open for explorers across South Yorkshire, in particular within the former mining town of Barnsley.

Fill weekends with exploring the Peak District National Park – you can camp, walk, pony trek, rock climb, cave, wind surf, fish or hand glide! Don’t forget to look up (or down!) once in a while to take in the views. South Yorkshire is also home to the Trans Pennine Trail, a popular long-distance cycling route.

Just south of the city centre you’ll find Sheffield’s famed antiques quarter, with a flea market complete with 70 stalls bursting with retro, vintage and antique buys, and individual shops and emporiums full of wonders. There’s even a ‘50s hair salon!

This 3-mile-long walk takes in cascades and waterfalls, plenty of stepping stones for kids to jump across the river, as well as the remains of multiple watermills and mill dams. There is free parking, a nearby café and play area as well as lots of opportunities to spend a sunny afternoon.

South Yorkshire has all the local amenities that you would expect from a vibrant county.

With over half of the county’s population dwelling in and around Sheffield you’ll find great schools, healthcare and transport links. But even the smaller villages and market towns are well served.

Sheffield as the largest hub in South Yorkshire has over 100 primary schools, 37 secondary schools, three sites for further education, two universities as well as five well respected independent private schools. Doncaster is also well equipped for primary, secondary and further education. In Barnsley you’ll also find another university, two colleges and plenty of primary and secondary schools. In total the county has 14 private schools and one private boarding school. There are a good number of schools ranked ‘outstanding’ by OFSTED including Sheffield’s Hunter’s Bar Junior School and Notre Dame High School. In Doncaster, The Hayfield School made number 4 in the Real Schools’ Guide 2020 of best schools in South Yorkshire.

If you need to fly, then you have your pick of four regional airports: Robin Hood near Doncaster; Leeds Bradford; East Midlands; and Manchester. Train links are excellent, with direct trains into London St Pancras from Sheffield taking just two hours. From Doncaster, London’s King’s Cross is just an hour and 40 minutes. Cross-country trains and local bus services are also good. In addition, Sheffield and Rotherham are linked by tram. Road links to the south and north are good with access via the A1/A1 (M), M1 and M18.

In Barnsley there is the Kendray Hospital, and in Sheffield, you’ll find Sheffield Children’s. There are A&E departments at Rotherham Hospital; Northern General Hospital, Sheffield; Barnsley Hospital; and Doncaster Royal Infirmary.