Combining the beautiful countryside with urban living, Hampshire is an idyllic location on the south coast of England, just 54 miles from London. It’s a dream spot for those looking to live within the beautiful English landscape and charming coastal towns.

There is a reason why Hampshire is a popular location to move to; it has a rich history combined with vibrant countryside and coastal views

Attractions to see include national parks, museums, seaside resorts and more. The county is affiliated with infamous writers such as Arthur Conan Doyle, Jane Austen and Charles Dickens as well as influential figures such as nurse Florence Nightingale and engineer Isambard Kingdom Brunel. Due to its rich history and attractions, Hampshire is one of the most affluent counties in England with an unemployment rate lower than the national average. 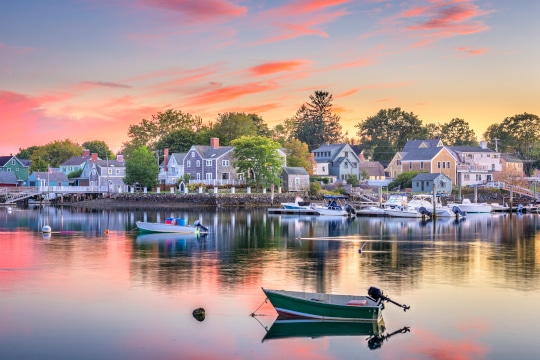 Points of interest in Hampshire

Theres plenty to explore in beautiful Hampshire. Some of our favourites include:

Hampshire isn’t short of influential figures living in Hampshire but one that you should pay close attention to is Jane Austen’s House in Alton, Hampshire. Author of Pride and Prejudice, Emma and other novels, Jane Austen’s house has been turned into a museum. The 17th-century house is where she spent the last eight years of her life and visitors can take a step back in time to where Austen wrote her novels.

The South Downs is regarded as the “gateway to England” because of its gently sloping green hills, globally significant chalk grassland, ancient woods, starry night sky, wildlife-rich heathland, and windswept cliffs. Visitors can go on endless new walks with over 3,300km of footpaths, bridleways and byways – more than any other National Park.

For TV and film fans, the Highclere Castle is worth visiting as the 5,000-acre estate has been used as a filming location for many films and TV series – the most popular of them all is the historical drama, Downton Abbey. The castle also has an Egyptian Exhibition which celebrates the 5th Earl of Carnarvon’s discovery of Tutankhamun’s tomb.

Listed as Grade ll on the National Register of Historic Parks and Gardens, Exbury Gardens is a 200-acre woodland garden with a spectacular collection of plants, trees and beautiful landscapes. The steam train is also highly recommended to visit the rest of the gardens such as the Summer Lane Garden which is only accessible by train.

Hampshire’s attraction lies not only in its serene views but also in the excellent schools in the region and great public transport network.

Hampshire has a solid education system, with state schools outside of the two major coastal cities performing much better than the national average. There are many different independent schools, ranging from little preps in the villages of the forests to the prestigious Winchester College. As well as schools, there are 4 universities in Hampshire which include Southampton University, University of Winchester, University of Portsmouth and Southampton Solent University. There are a good number of schools in the area which have been ranked as the best in Hampshire using data that takes into account attainment, progress, attendance, and outcome. These include Thornden School, The Westgate School, Saint George Catholic Voluntary Aided College Southampton, Calthorpe Park School, The Petersfield School, St Anne's Catholic School, Oaklands Catholic School, Bohunt School, Court Moor School and The Burgate School and Sixth Form.

Hampshire’s transport system is great for those wanting to get around the county, the rest of the country or even abroad. Rail lines arrive in Waterloo either via Petersfield in Portsmouth or via Basingstoke in Salisbury or Southampton. Additionally, Southampton has an international airport, and Portsmouth has ferry connections to France and other countries. The M3 runs through the county's centre, and the A3 and A31 are helpful, quick routes that connect Hampshire's towns.