With an idyllic spot on the south coast of England, the East Sussex city of Brighton lies just 50 miles from London, making it a hit with those looking to escape the hustle and bustle of London for somewhere with vibrant coastal charm.

There’s a reason Brighton is also known as London-by-Sea; it’s a lively, cosmopolitan centre just like the capital, yet has a glorious position on the English coastline.

There’s a strong artistic community with its spirit expressed through the many galleries, events, shops and festivals throughout the city. Complementing the art movement, Brighton is also home to a thriving tech and digital sector, plus two universities. Brighton’s population encompasses everyone from the affluent looking to escape London, to students looking for a top spot for nightlife – each personifying their own little pocket of the city.

Students tend to flock to Hanover, an up-and-coming neighbourhood that is hard to beat when it comes to value for money. For those looking for something a little quieter yet still affordable, Poets Corner could be the spot. Kemptown is made up predominantly of rental properties and converted flats so it’s another top student destination, with the added bonus of being close to the beach and packed with bars, pubs and night spots.

Unsurprisingly the better your seaview the more you can expect to pay for your home. The well heeled head for the Regency Squares like Brunswick, Lewes and Palmeira or other seafront spots. Fortunately, it’s possible to find shared ownership schemes in sought-after areas – for example Edward Street Quarter’s 1- and 2-bed apartments will see you just moments from the beach and within striking distance of Brighton Palace Pier.

Preston Park is currently highly desirable for home movers too. Set to the north of the city, it’s great for commuters as it has its own train station, and is also home to excellent schools and Queen’s Park North. Preston Park is home to both the Brighton Marathon and the Pride Festival.

Brighton’s best known location is perhaps The Lanes – a series of winding alleys set in Brighton’s historic quarter. You’ll find everything from boutique fashion and antiques, to second hand, and homeware stores plus a great range of restaurants and often live music.

And after the distractions of a busy city it’s good to know that the South Downs National Park is a mere stone’s throw away, with a great selection of walking routes and cycle paths to unwind on. 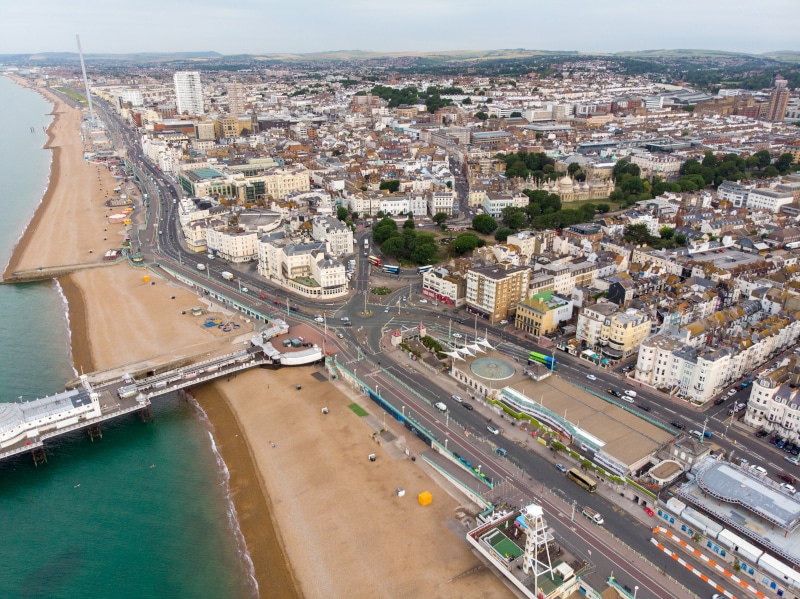 There’s plenty to explore in beautiful Brighton. Some of our favourites include:

This working harbour is a great spot to while away a few hours if you fancy a break away from the beaches. There’s local artwork to gaze at, free ping pong tables for a spot of table tennis and giant chess boards. You’ll also find the largest fair-trade shop selling clothing, jewellery, homewares and more, enough restaurants to eat every meal in a different spot for a week and then some, plus entertainment. Whether you’re after a movie, bowling or mini golf you’ll find it here.

Since 1967 Brighton Festival has carved itself a reputation as the largest and most established annual arts festival in the country. For three weeks in May the city is transformed into a pulsing heart of theatre, music, dance, art and literature. There’s plenty of family-friendly events happening each year as well, and the opening children’s parade is one not to miss.

Brighton certainly isn’t short of an iconic landmark or two (the pier,British Airways i350, Volk’s Electric Railway, Sea Life Brighton to name but a few), but special mention should go to The Royal Pavilion, with its impressive domed peaks. This was the seaside retreat of Prince Regent (George IV) and marries a dizzying blend of Indian architecture with Chinese-inspired interiors. There’s also a beautifully restored Regency Garden to explore.

People make the move to Brighton on the strength of the beaches alone. There’s several to pick from. Brighton Beach’s pebbly shores are vast and thanks to its cove setting offers safe shallow waters for youngsters. Kemp Town Beach is quieter and offers a sandy/pebbly beach, plus unlike Brighton Beach it also has a lifeguard facility. Hove Beach is another near-by stretch of beach that offers peace and tranquillity and is rarely busy.

Brighton is top for attractions and entertainment, but for residents it’s the smaller things that make a big difference to quality of life. Brighton is home to seven Green flag parks as well as numerous other green spaces. The South Downs National Park is a 30-minute bus ride away and has Dark Sky Reserve status making it ideal for a spot of star-gazing.

Brighton’s attraction lies not only in its sandy shores, but also the excellent schools in the region and the hard-working public transport network.

Brighton’s school allocation is organised slightly differently from elsewhere in the country. When a school is oversubscribed instead of accepting students based on catchment areas, it operates a lottery-based system. As well as state schools for primary and secondary education, there are also private schools, the popular Brighton College plus the University of Sussex – regularly ranked amongst the top universities in the UK - and the University of Brighton. There are a good number of schools in the area which have been ranked as outstanding by Ofsted including Downs View Special School, Brighton Hove and Sussex Sixth Form College, Downs Junior School, St Luke’s Primary School and Patcham Infant School. Private schools include Roedean School, Varndean College, Christ’s Hospital School and Cottesmore Preparatory School.

Brighton’s roads are fairly congested at peak times, however public transport is plentiful and within the centre it’s compact and easy to navigate. The park and ride operates from Withdean and will whisk you into the city, bypassing the problem of car parking. Not only can parking be expensive in the centre but it’s hard to come by. Brighton Station is centrally located; it’s a 10-minute walk from town, or 15-minutes from the beach and means you can travel by train to London in under an hour. A second station, London Road, also offers direct links to the surrounding towns and other UK cities. The local red and white buses operate on an extensive busy network and it’s possible to buy weekly or monthly travel passes. For night owls, there are also night buses to take you home.